The Species Threat Abatement Restoration (STAR) metric uses IUCN Red List of Threatened Species data to estimate the potential reduction in species extinction risk that could be achieved at a site, across a corporate footprint, or within a country. It can also be used to set local or global species extinction risk targets, and measure progress towards those targets.

Methods used by companies, countries and NGOs to measure conservation impact vary greatly, partly because they operate across a wide range of geographies, timescales and actions. This makes assessing and comparing conservation achievement between these actors very difficult, and joint target-setting and monitoring impossible. A metric that formulates targets in a way that can compare across scales and end-users, allows all types of actors to deliver on global targets, not simply States and governments.

The STAR methodology (Mair et al. 2021) draws on the Red List data to produce estimates of the potential for species extinction risk reduction broken out over a global 5 x 5 km² grid. For each pixel within this grid, STAR estimates the contribution of the threats affecting species present in the grid to the total value for the pixel. Values of pixels can be added up to enable assessment for larger polygons representing corporate footprints, administrative areas, protected areas, or commodity production zones.

STAR also estimates the amount of species extinction risk reduction that can be achieved by restoring habitat where threatened species used to occur. The restoration STAR value is discounted compared to the threat abatement value, to reflect the longer timescales of restoration impact.

It is therefore possible to identify actions that land managers, company executives or conservation project implementers can take to reduce extinction risk in their areas of intervention, through reducing the level of the threats or restoring habitat. Reduction of the level of threat corresponds to the delivery of a number of STAR units, which can be formulated as a target, compared with values from another site, or added to the values from another site to show the potential impact of a portfolio of sites.

Fig. 1 shows the contribution that threats from the Red List Threats Classification make to STAR scores globally, and the corresponding contribution that restoration could make to reducing species extinction risk. 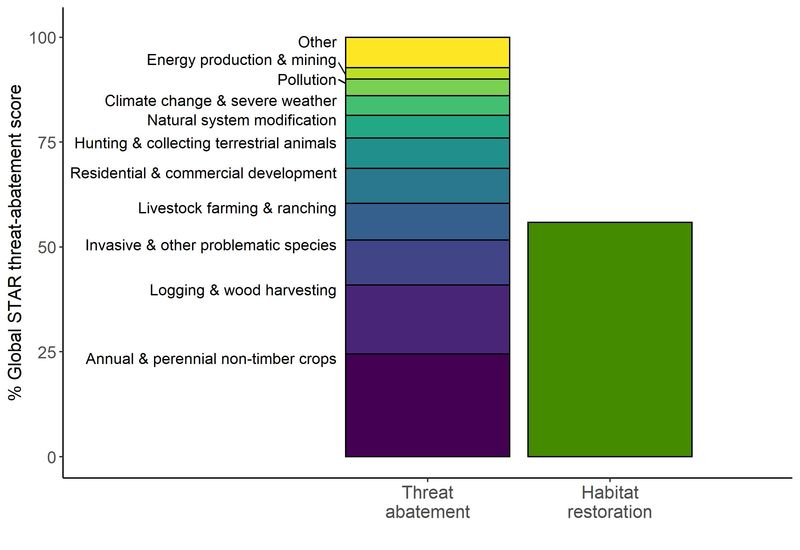 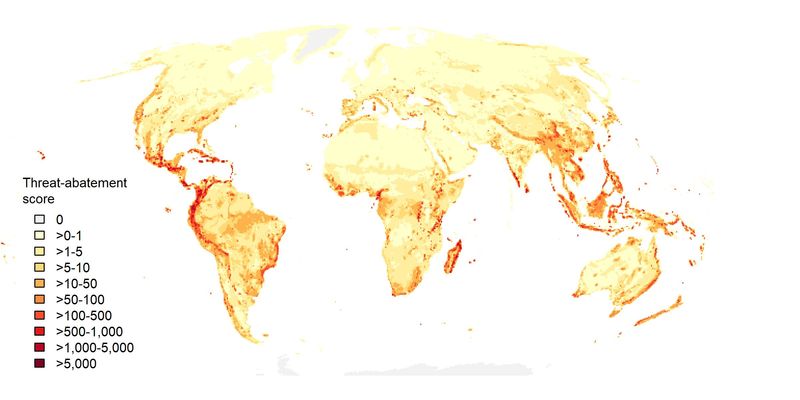 And this analysis can be broken down by individual threat, to illustrate how conservation action that targets specific threats can contribute to species extinction risk reduction (Fig. 3): 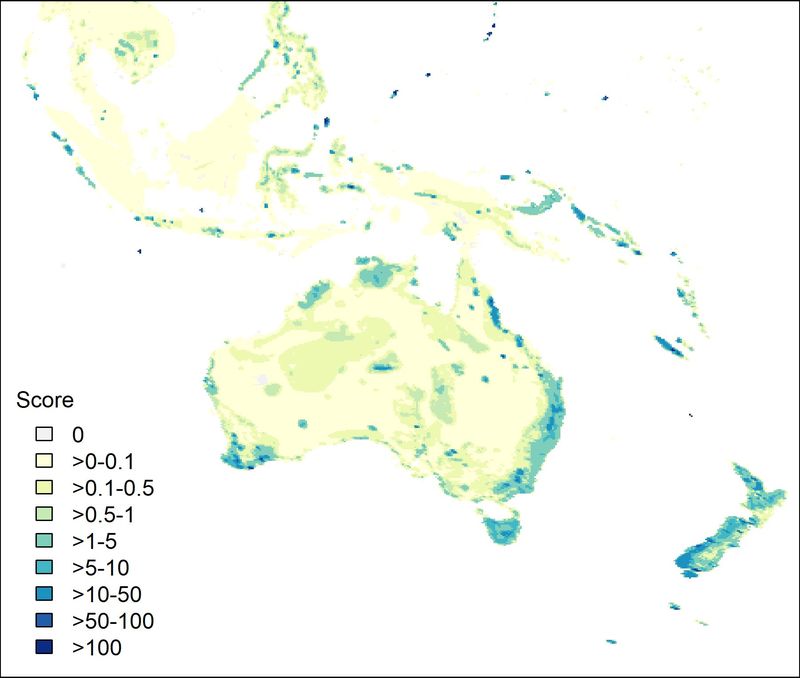 The analysis also shows which countries have the greatest opportunity to contribution to species extinction risk reduction (Fig. 4): 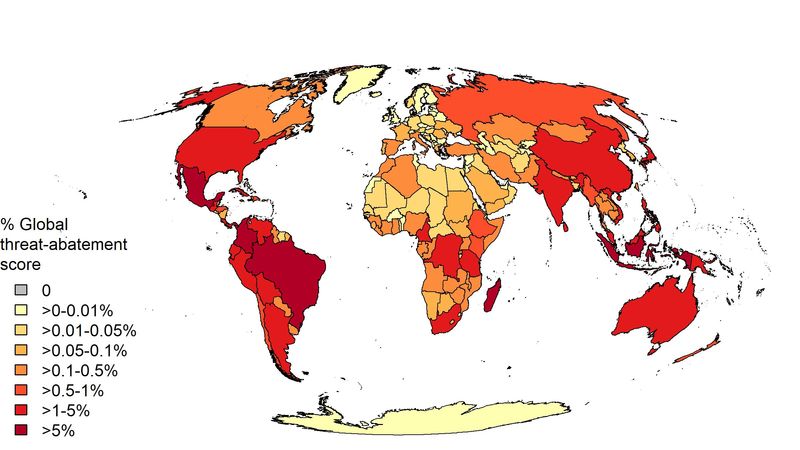 At the project level, STAR can help to orient management action as it can show where management of particular threats or restoration would bring the greatest extinction risk reductioon. Fig. 5 is a case study from the Bukit Tigapuluh landscape in Sumatra:

STAR is currently calculated using comprehensively assessed birds, amphibians and mammals. The opportunity for inclusion of other taxa such as trees, reptiles, cacti, cycads, freshwater fish and reef-building corals will come as these taxa have AOH data made available.

Threat impacts are assumed to be constant across species AOH. Refinement of this is possible using global threat heat maps.

Assessments are conducted using global datasets and need to be complemented with on the ground verification of species and threat presence.

For some species, complete threat abatement would not necessarily lead to downlisting in the short term. For example, for species that are assessed as threatened due to small population size, threat abatement may reduce extinction risk, but might need to be complemented by restoration in order to achieve Least Concern status.

STAR does not address newly-emerging or worsening threats, which are addressed through Red List re-assessments.

For general or technical inquiries about STAR, please contact star@iucn.org.

For interest in applying STAR for commercial use, please contact star@ibat-alliance.org.

See the IUCN STAR website and an IUCN Issues brief for further information.

We acknowledge funding from Newcastle University, the Luc Hoffmann Institute, Vulcan, Synchronicity Earth and the Global Environment Facility, as well as support from the Conservation International GEF Project Agency.