How Does the Green Status of Species Define Recovery?

The Green Status of Species assessment measures species’ status against a “fully recovered” baseline, which is unique to each species and is based on three key characteristics (Akçakaya et al. 2018):

If the aim of recovery is to restore species to areas and ecosystems from which they have been extirpated, then the concept of range is central. For the purposes of the Green Status of Species, indigenous range is considered to be the distribution of a species prior to major human disturbance (plus any additional wild populations that have established since then). The date at which indigenous range is inferred can therefore vary from species to species; however, useful anchoring dates include 1500 (pre-European expansion) and 1750 (pre-industrialization). For some species, like island endemics, historical range is easy to delineate. For wider-ranging species, defining historical range may be more challenging.

The definition of recovery under the Green Status also includes “expected additional range.” This takes into account areas that are likely to become occupied by species within 100 years either from range shifts due to climate change or from conservation translocations.

Parts of the Range: Spatial Units

Once the relevant range has been defined, a Green Status assessment subdivides the indigenous and expected additional range into spatial units. These spatial units help account for variation in species status across the range, and can be based on species’ biology (e.g., subspecies or subpopulations), ecology (e.g., habitat type, watersheds, dispersal barriers), or even anthropogenic boundaries (e.g., countries).

A species is considered viable in a spatial unit if application of the Regional Red List Guidelines to the population in the spatial unit would result in a categorization of ‘Least Concern’ OR ‘Near Threatened and Not Declining’.

The ultimate goal of species recovery is to maintain or restore functional populations. The functions that different species perform in the ecosystem are many and varied, so the function of each species must be assessed on a case-by-case basis. See Akçakaya et al. (2020) for proposed methods to assess species functionality.

One fairly straightforward example is the function of Wiregrass (Aristida stricta) in acting as tinder and allowing naturally-occurring and ecologically necessary savanna fires to spread (Figure 2). For a Wiregrass population to be functional, it would have to be present at a high enough density to allow fire to spread from plant to plant. 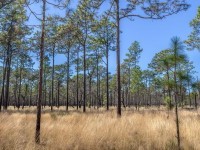 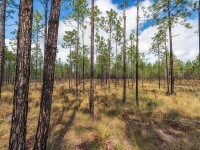 Figure 2. Pine Savanna in the southern United States where the open understory is maintained by frequent fire, which Wiregrass (the tan-coloured grass) plays a key role in spreading. The photo on the right shows the Wiregrass regenerating with char marks evident on the pines (Photo credits © Daniel Goodding).

Calculation – how close to recovery is a species?

The recovery definition is translated into a Green Score (G), a numeric value from 0–100%, using this equation:

The Green Score calculated at the time of assessment is the Species Recovery Score. This score could be tracked over time as species are reassessed to create an index of recovery.

However, Green Scores can also be calculated under other scenarios besides at the time of assessment — see The IUCN Green Status of Species page.

Further information on how to undertake a Green Status assessment including guidance documents and assessment materials is available here.